Parsons Rocket Project is obsessed with all things celestial and spacey. Perhaps that’s why they named their band after Rocket Scientist, Jack Parsons. Sonosphere corresponded with the members of PRP to talk about space, time, and the music in between. They also shared a dream-pop playlist flush with rock reverb, fuzz and disco thumps. Check it all out in the interview and playlist below. Thanks PRP for the tunes!

The debut EP was formed during a tumultuous time for you all as individuals and a band – what songs were you listening to, who/what were your inspirations; was songwriting almost like therapy for you all? Did it bring you together, solidifying the band?

well, it still is tumultuous! we were/are listening to No Joy, Brian Eno, The War on Drugs,Trailer Trash Tracys, Ulrich Schnauss, TYCHO, and a lot of fun stuff like Summer Camp and disco-era Bee Gees (not kidding, its that disco thump) the way we recorded the EP we never were all in the same room at the same time, so it really was isolated in that sense. it really was a virtual band until after the tracks were recorded. there was some definite personal turbulence going on the time these were written, that is reflected in the tracks particularly “burn.”

Were you always interested in science and space as a kid? What about Jack Parsons led you to name your band after him?

Definitely an obsession with celestial/space things for all of us. Saturn and stars tattoos, spacey graphics, space noises,  space rock, I’m not kidding when I use the term “obsession.” its definitely a thing for us.

Parsons’ mingling of science and occultism is fascinating and it produced amazing results with dire consequences. he innovated some rocket technology, but ended up blowing himself up and leaving a very sordid legacy. He is such an interesting character though, the creation of NASA’s Jet Propulsion Lab, the trip to the moon, he played a huge role in that and he was also a real legendary degenerate, so that is really intriguing. NASA has disowned his history, but there is a crater on the moon named after him (on the dark side of the moon of course.) and many still refer to JPL, the Jet Propulsion Lab as the Jack Parsons Lab. there may be some upcoming movies or TV shows that explore Parsons, so that will be interesting.

Do you incorporate science and space into your performances?

Does the city of Atlanta influence your sound/aesthetic?

What was it like working with Joe Lambert and recording in a space where some legendary songs were made?

Joe Lambert is such a heavyweight in the industry, we could not have been more pleased with the results there. Ben Price’s StudiLaroche where we recorded is such a great space. we’ve all recorded there in other bands so it is a very familiar, comfortable, homey space.  Plus its a great studio, he has a lot of cool sound toys there to play with and he is one of the best around as far as engineering & producing. recording was just a lot of fun, when we brought in Anne, Michelle and Jennifer for vocals tracking and it was such a great time, like a house party. we had to keep leaving to get more beer, we really invoked some 80s absurd rock star good times but it was productive sonically too, we’re pleased with the tracks. 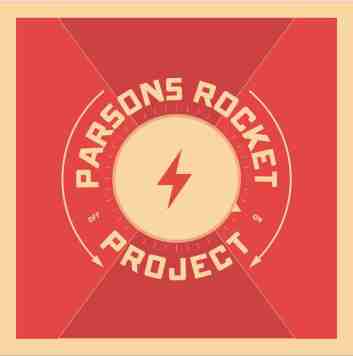 Will you be touring with the new record?

that was the plan but we got hit by the life tornado, Ben Price (guitars, vox) was injured in a really terrible bicycle crash and then there has been other disturbances…so the touring plans got pushed back for now but we’ll come back to that. we’re now all super busy at the moment not just with working on new parsons rocket project material, but we also have our other projects. K Michelle is working on her 2nd LP, Paul has another space rock band called map of the moon that is recording with Dan Dixon (PLS PLS)

Parsons Rocket Project has some big shows coming up in Atlanta in the meantime and we can’t wait for that. The EP is out and its been well-received, so we’re definitely looking forward to expressing ourselves at high volume. after we get our new material recorded, we’d like to do a compact tour which was the original intent.

What are you looking forward to most about touring?

its exciting, the travel, playing different rooms and meeting people. (individually) we’ve toured pretty extensively before in all of our previous bands, so we’re looking forward to touring more intelligently now. we used to slug it out in the clubs for long stretches of time and we really weren’t very smart about it. short, disciplined, focused bursts are the way to go and that is what we plan to do, eventually.