Sonosphere connected with Nicole Marxen-Myers of Midnight Opera. The band will be hitting the Midwest for two-weeks to showcase their theatrical live performance starting August 30th in Dallas. Midnight Opera is the glam rock band of four friends from Dallas, TX. Mixing ominous art pop with opulent set design and deranged alter egos, their live show makes you feel like you could go out and invent a new color, or wear a leotard to work. Check out Midnight Opera in your city soon but for now check out the rad playlist Nicole assembled for us following the Q&A. 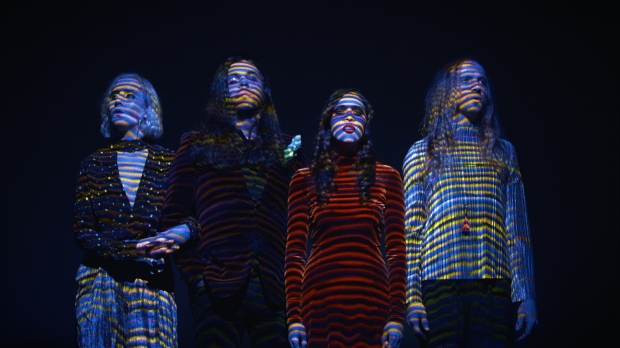 Do you write songs with theatrics already in mind?

We don’t, but we do a lot of prep work while writing that helps inform the theatrical aspect of the band. I’m a very visual person. I find that I naturally associate music with film, so one thing we do is make mood boards for songs we’re writing. It’s like storyboarding a film, it helps to find specific moments and tone within a song.

How much focus is put on the aesthetics of the performance?

We put a lot of work into the visual aspect of the band, whether it’s choreography, lighting, set and costume design. Songwriting comes first, but I tend to think about both aspects simultaneously. We each have different skill sets that we bring to the table, which balances out the work load. Both of the Pauls build, while Teddy and I sew, etc.

You are headed out on another tour soon. Y’all have been hitting the road quite frequently. What effects has it had on the band as a whole?

Tour has made us a well oiled machine. It can be challenging, but we’re all so close now because of it. And personally, I love playing every night. I feel like I’ve grown as a performer, I learn something new everyday.

Are there certain tricks of trade you have learned on your first few trips on the road?

Wear sensible shoes. Get out of the van every 2 hours and stretch. If you’re going to wear a weird costume, you better bring a steamer. Abba is a dance party’s key ingredient. Sometimes the solution to all your problems is a nap. If your lung collapses, go to the hospital and don’t try to blame it on too much Sriracha.

What do you look forward to on the new tour?

We’re excited to see all of our friends in the Midwest. We’ve toured there a few times now and we’ve always had a positive response.

What can you tell us about coming out of Dallas. How has the city/state affected your sound?

Dallas is actually a cool city. A lot of people talk about how great Austin is, but it’s so oversaturated. The Dallas community is very tight knit and supportive. It’s come a long way too. I don’t think that we could be doing what we’re doing five years ago.

Can we look forward to more new tunes from Midnight Opera soon?